Dear -- all two -- Readers!     A wave of inspiration came over me and after a couple hours with 3rdPlanIt, I present to the world Version 1 of an O-scale plan that fits in (a future state of) my basement.

Long term, the edges of the whole basement will accommodate the southern 2/3rds of the line with almost no compression.   I have room for a run of about 70 ft which equates to ~3400 real ft and this covers from the southern tip of the line up north to 31st on the south side of Schutte Lumber.

This plan iteration covers the southern most ~1700ft with just a touch of compression to cover from the southern tip up just past the south-facing switch for Safeway Bakery.   A temporary shelf containing an eight-foot run-around and a spare track for storage fills the remainder of the south wall.

All-in-all, it's a pretty faithful representation of the Hill Track, though I've yet to work out all of the grades as this level of detailed editing takes much longer in 3rdPlanIt.   Preliminary work indicates that I'll be able to reasonably replicate the signature east-west elevation change of 34th St and the requisite north-south railroad grades in between and level out for the spots.

The unique nature of the spread between Roanoke Rd (front edge, left side) and Terrace St (upper right side) meant that the whole works was pulled away from the wall and a duckunder included under Fred Wolferman's driveway.  Duckunders aren't great, but since I was already planning to have the base elevation up close to (my) eye-level, it shouldn't require much ducking.  A two-plus-ish foot aisle along the right (west) wall allows one to access the spots along Terrace St as well as view the scene from a different vantage point, so no backdrop.

Anyway, here's the plan (click on it for a larger version): 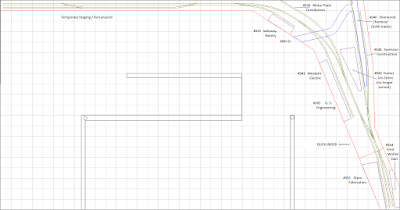 Added a page to the blog with the full roster of equipment.  It needs some formatting work to be more presentable, but it'll do for now.   Click in the top bar to find it or visit: https://kcspur.blogspot.com/p/roster.html
Posted by Rich S at 10:09 PM No comments:

Just (re-) joined the LDSIG and looking forward to upcoming articles, especially those focused on specific prototype recreations.

Who knows if anyone reads this thing, but I'll do my part in this small corner of the internet to promote some additional 2 rail O scale resources.

I've found good articles and other reference information via all of these resources at some point in the recent past and continue to follow them myself, so I recommend that you check them out as well.
Posted by Rich S at 8:50 PM No comments:

Whew!  Nearly two years since a post on this blog.   2019 might see more opportunities to dabble in model trains again now that kids are more self-sufficient and home remodeling has quieted down.

Anyway, I return today with a product announcement of sorts and a (soon-to-be-) addition to the roster.

Smoky Mountain Model Works recently (April 2018) released their "return to O scale" kit for an AAR 53' 6" 70t flat car.   I heard many good things about their kits in general and from those who built this kit since its release.

Alas, I wasn't fully sold on it until finally (!) completing enough research to prove that this car type would've been active in my target era of mid-1970s to early-1980s.  Using a recently-re-discovered digital release of Vintage Freight Cars from Morning Sun Books, I found a 1973 picture of Penn Central 751355 as shown below:

I was then able to track the car series through my hardcopies of the Official Railway Equipment Registers like so:

So, armed with this new information and previous research on customers and commodities showing that U. S. Engineering could be a customer of coiled steel, I ordered one of the car kits.   Stay tuned for future updates when (?) I get around to building either it or anywhere to operate it.
Posted by Rich S at 10:58 PM No comments:

I mentioned in my previous post that I was going to try creating prototypical rust on steel model rails.  After a dunk in a saltwater, vinegar, and hydrogen peroxide bath, the results -- er, should I say "rustults" -- are in.   I primarily used the method documented at this link, specifically the ratio of "4 parts white vinegar, 1 part hydrogen peroxide (3%) and 1/2 part of salt" found in the comments section.

See for yourself:
The rust is real, folks...but...maybe...it's a little too real.

Critiques on Day 1:
For comparison, here are some shots of the prototype track:
If there are any readers who'd like to comment, I'd be interested in your thoughts.


Other sources pointed to nitric acid but also said that that's a pretty harsh chemical and I've not yet looked for a supplier of that.

There's a distinct risk that a low-traffic'd blog would lose its whole readership when 9 months elapses between posts but hopefully my reactivated progress and some new posts will start to reverse this.

I just returned from a visit to the 2017 "March Meet" in Chicago, IL where several new rolling stock acquisitions were made.  See the updated Equipment Roster page for the latest updates.

I also acquired a few other smaller items like real limestone loads for delivery to Carthage Marble and the first turnout parts from American Switch & Signal.

While no actual layout construction has begun, I'm embarking on an experiment to try to accelerate the rusting of real steel rail (code 125 as discussed earlier); we shall see what results develop with that.

Hopefully this will mark the start of some more regular postings!
Posted by Rich S at 10:47 PM No comments: